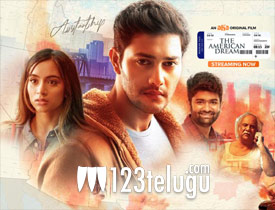 Aha Video’s latest outing, The American Dream is streaming on the platform now. The thriller drama has Prince Cecil, Neha Krishna, and others in the lead roles. Scroll on to read our review of the film.

Prince, who hails from a humble background, flies to the USA in pursuit of a job. After several failed job trails, he meets Neha. The couple then enter a no strings attached relationship. But all hell breaks loose after Prince gets involved in a murder case. What is the story behind the murder? How does it affect the lives of the couple?

The American Dream is predominantly set in USA backdrop. The younger generation people who moved to USA from India can relate to the film. The troubles faced by the majority of the newly moved Indians in USA are showcased in a realistic manner.

The climax twist is the crux of the film and it packs a punch. Although it may seem fabricated and artificial at first, the subsequent explanation scenes are authentic. The end portion has been handled pretty well.

Prince and Neha have delivered fine performances. Neha, in particular looks gorgeous on screen and she emotes well. The rest of the support cast has done the job relatively well.

The American Dream is almost entirely reliant on the big twist in the climax. Consequently, the majority of the portion in the opening hour is underwhelming and bland. The scenes pertaining to the struggles faced by the protagonist might be relatable to many but they are predictable.

The narrative is uneven for most parts. The tempo of the proceedings keep going up and down through the course of the film, which is a result of the not so well rounded storyline. More emphasis was needed on the part that builds up to the big climax.

The director Koushik pens a simple yet effective storyline. He handles the emotional part well. But his narration is a tad patchy. Had the opening hour been more compelling, the film would have made for a far more intriguing watch.

The American Dream mostly banks on the climax twist. The end portion is handled well, but the opening exchanges are bland and the pace of the proceedings keeps dropping every now and again. Young might give this film a try if you have enough time to spare this weekend.