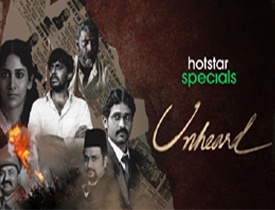 Unheard, a Telugu limited series featuring Priyadarshi, Ajay, Chandini Chowdary, Baladitya, and others in the lead roles is streaming on Disney Hotstar now. Here’s our review of the series.

Set in the pre-Independence era, the series revolves around the principal characters who narrate their take on India’s freedom struggle. All the six episodes are almost entirely based on conversations between 2-3 characters.

Ajay, Priyadarshi, Chandini, and Baladitya play the central characters in the series and they deliver very good performances. Ajay, in particular, excels in emotional conversations.

The whole narrative is based on the conversations about the freedom struggle. This is a new kind of an approach and it certainly doesn’t cater to all sections of the audience.

The conversations turn monotonous beyond a point. The dialogues a tad too elongated in the 2nd and 3rd episodes. The ending is a bit underwhelming as well.

The production designing is of top quality. The essence of Hyderabad, and Secunderabad in the pre-independence era is presented very well. Background score is adequate. Cinematography is of elite quality as well.

Unheard is a conversation series which can be termed a new attempt in the Telugu web space. While a few might find these conversations pertaining to India’s freedom struggle engaging, other will find them boring. The series is a mixed bag.