Review : Pani Leni Puli Raju – Stay away from this one 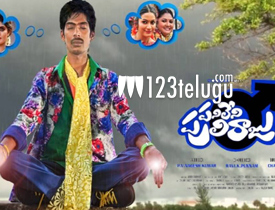 Comedian Dhanraj is back with yet another comic caper Pani Leni Puliraju which has hit the screens all over today. Let’s see how it is.

Puliraju(Dharaj) is a happy go lucky youth who wastes his time mostly in the company of women. Seeing his carefree nature, his father gets him married to a girl from a small village. As time passes by, Puliraju’s father starts forcing him to have a baby boy so that his family lineage would continue further.

But destiny has other plans as Puliraju’s wife delivers a baby girl. Adding insult to injury, Puliraju finds out that his wife cannot give birth to anymore children because of some health issues. Upset with this, Puliraju’s dad kicks him out of his home and demands him to come back only with a male successor.

What will Puliraju do now ? Will he marry again and have a baby ? What will happen to his wife and daughter ? To know answers to all these questions, watch the film on the big screen.

One of the main saving grace of this film is Dhanraj himself. It is his timing and comedy sense which brings some relief to the viewers. Some of his adult comedy will work well with the B and C centres.

The performance of late comedian Kondavalsa is also good to watch. The talented comedian supports Dhanraj right through out the film with his interesting character.

Even though the film has a simple point, the way things unfold with a lot of over the top and double meaning comedy irritates you completely. Second half of the film is a huge torture as the entire proceedings have absolutely no direction or clarity. The various avatars that were done by Dharaj have no meaning and lack proper execution.

The characters written and the way they behave in crucial scenes lack basic sense. Even the so called comedy scenes fail to evoke any laughs. The makers tried hard to create some fun with the use of many female characters but none of them worked one bit.

Graphics used in the film are horrible. Music is okay and so were the production values. Dialogues are decent but the editing is pathetic. Coming to the director Cha Cha, he has done a horrible job with the film. He tried hard to induce some fun in the first half but took the film down with his directionless narration during the second half.

On the whole, Pani Leni Puli Raju one of the most silliest movies that has come out in the recent past. Right from the word go, this film irritates you with some over the top scenes and some outdated narration. Stay away from this one.
123telugu.com Rating : 2/5