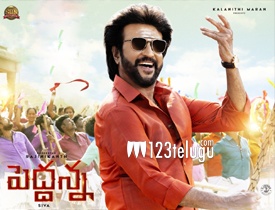 Peddanna is a film that not many knew was even released in the first place today. The Rajinikanth starrer is out as a Diwali release and let’s see how it is.

Veeranna (Rajinikanth) loves his sister Kanakam(Keerthi Suresh) to death and can go to any extent for her. One fine day, he fixes her marriage, and right on the wedding day, Kanakam elopes creating a huge setback for Veeranna and his family. Six months go by and Veeranna finds out that Kanakam is in Kolkotta and is in neck-deep problems. Why is Kanakam in Kolkatta? What is her problem? and how did Veeranna save her? That formes the rest of the story.

Rajinikanth is the basic asset of the film. Even at this age, he dances and mouths solid dialogues. His screen presence is superb and Rajini shares a lovely bond with Keerthy Suresh. Nayanthara looks beautiful and does her part convincingly.

Keerthy Suresh gets a meaty role and is showcased mostly in pain through the second half. The national award-winning actress does well in her role. The scenes featuring Meena and Khushboo create a few laughs in the first half.

The first half is based in the village and has decent emotions. The fights showcased are good and those designed on Rajini will please his fans a bit.

The film is directed by Siva and he brings in an age-old storyline for the audience. The story is so mundane that you exactly know what is going to happen next.

The narration is so old and dull that even Rajini cannot save the film after a point. The brother-sister bond lacks focus in the second half. Rajini, who loves his sister to death does not even confront her and keeps saving her from the goons. This basic logic goes for a toss.

The conflict point in the film is quite dull and has no meaning at all. Jagapathi Babu is getting so repetitive in his roles and so is Abhimanyu Singh. Nayanthara has nothing to do but appear as Rajini’s assistant in the film.

The makers have spent a lot and this shows on screen. The songs and BGM is the biggest drawback and does not create any impact. Telugu dubbing is perfect and so are the dialogues. The production design is good and the camerawork showcases the village visuals beautifully.

Coming to the director Siva, he narrates the film in a very dull manner. The emotions fail to create any impact and the thrill that Rajini fans look for is missing in the film. There is nothing new that the film showcases and creates boredom most of the time.

On the whole, Peddanna is a dragged-out family drama stuck in the ’80s. Lack of strong emotions, dull conflict point, and boring second half are huge drawbacks of this film. Hardcore Rajini fans will love their demi-god but the rest of the film is a very dull and overdramatic affair, to say the least.