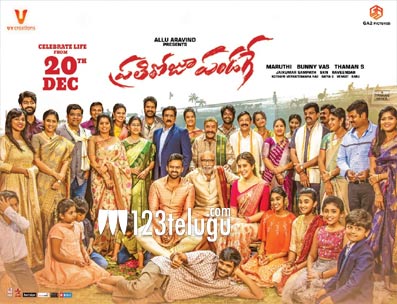 Pratiroju Pandage is a film that has been in the news a lot from the last few days. It was released along with Balakrishna’s Ruler. Let’s see whether it lives up to all the hype or not.

Raghuramayya (Satyaraj) is a 75-year-old man who is diagnosed with lung cancer and is in his last stage of life. He informs this to his family and his grandson, Sai (Sai Tej) takes lead and comes down to India and promises Satyaraj that he will make him spend the last few days of his life in peace with his family. But Satyaraj’s sons have no time for their dad and reluctantly come to India. What happens after that and how the family knows the real value of parenthood is the whole film all about.

Sai Dharam Tej’s role has been designed quite well in the film and he has done a very good job. Tej looks dashing and also performed well in key emotional scenes. All his scenes with Satyaraj have come out quite nicely and are a major key.

Maruthi and his films are always known for comedy and this film has good doses of it. Even though the concept behind the comedy looks over the top, it cracks you up nicely. The main credit goes to Rao Ramesh who is superb as the sarcastic son. The manner in which he gets irritated and evokes comedy was very good.

Raashi Khanna gets a good role. The manner in which a comic angle has given through the Tik Tok videos is very good and Raashi does well. Hariteja is neat in her role. Murali Sharma is also very good in limited role.

Last but not the least, Satyaraj was superb in his role and gives a whole new edge to the film. The manner in which he emotes in all the key scenes is very good.

The story line of the film is water thin and it resembles some few old films. Maruthi has given his own treatment and has narrated it in an entertaining manner at regular intervals. But in all this, he left out key emotions and made the film silly many times.

The family of Satyaraj is shown in a way too selfish manner which looks a bit over the top. There should have been one character among them who does not like what is happening with the senior member of the family. After a point Satyaraj and his role haven been.made quite dull as the senior actor does not have much to do other than watching what is going on with him.

Yet another drawback is that the climax is rushed up. Sai Tej gives a class to everyone during the climax and things change on their head and everyone is happy. This looks a bit absurd and hurried up.

Technical Aspects:
Thaman is in full form and this shows through his music and superb BGM. Production values of the film are top notch. Dialogues are pretty good. The camera work is very good as Rajahmundhry and its surrounding areas have been showcased well. Editing is perfect.

Coming to the director Maruthi, he has done an okay job with the film. He has narrated the film with good dose of comedy but his grip on emotions is weak. The main and crunch conflict point between the selfish sons and Satyaraj is not highlighted at all. A few more emotional drama from the beginning would have made matters a bit more breezy. But he creates ample comedy to keep the viewers engaged.

On the whole, Pratiroju Pandage is a typical family drama that has a predictable story and decent fun. A hurried up climax and lack of gripping emotional drama takes the film down a bit. But the comedy generated at regular intervals is pretty good and keeps the viewers engaged and ends this film as an average watch this weekend.