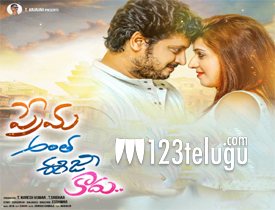 Continuing the trend of low budget films, yet another film which was released today is Prema Anta Easy Kadu. Let’s see how the film turns out to be.

Right from his childhood, Karthik(Rajesh Kumar) loves Prema(Prajwal) a lot. But this does not go well with his dad and he kicks Karthik out of the village. Due to some unavoidable circumstances, Karthik’s dad is forced to take care of Prema for over some period time. Karthik comes back and starts wooing Prema but she does not oblige his love. Even though she likes him, Prema keeps avoiding Karthik. Why is she doing like that? What is the back story? Will Karthik and Prema finally meet? That forms the rest of the story.

Hero Rajesh was good as the man lead. His performance in some emotional and action-filled scenes was very good. Rajesh’s dialogue delivery was also spot on. Heroine Prajwal looked glamorous and also performed with a lot of ease in the film.

Comedians Dhanraj and Ram Prasad tried to evoke a few laughs here and there. The Goa beach episode featuring Dharaj and his mannerisms were hilarious. The actor who played the hero’s father was also impressive in the emotional department.

The concept of love and belief looks good but the manner in which it is executed on screen looks jaded. The first half had many unnecessary scenes filled with bad humor. If this was not enough, the second half goes haywire with forced emotions and dragged scenes which are executed back to back.

The love story in the second half gets very weak and this is where the film goes for a toss. There should have been more drama to make things interesting between the lead pair which the makers missed completely.

Music of the films was so-so as the songs obstruct the proceedings and come in as bits and pieces and id irritate the audience. Editing is disappointing and so was the production design. Camerawork and production values were okay. Coming to the director Eswar, he has done a disappointing job with the film as his narration had no seriousness at all with same old routine drama.

On the whole, Prema Anta Easy Kadu is a film which does not have anything going its way. Boring execution, routine story, and forced emotions kill the proceedings completely hereby making this film a tedious watch this weekend. Avoid it and look for something else this week.