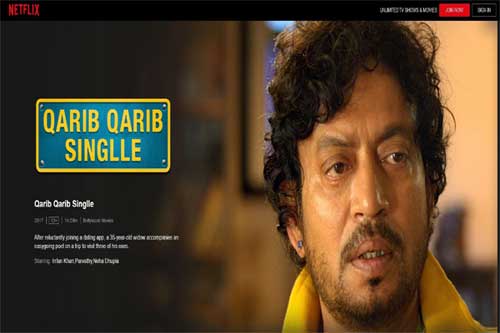 So, continuing the series of reviewing movies and shows during the lockdown period, our today’s pick is the 2017 Irrfan Khan starter Qarib Qarib Singlle. Directed by Tanuja Chandra, this film is available on Netflix.

The story revolves around Jaya Shashidharan(Parvathy Thiruvothu), a widow, who lives alone and works at an Insurance Policy company. One day, she finds Yogi(Irrfan Khan), on an online dating website. They finally meet in person and plan to go on a journey to meet Yogi’s three ex-girlfriends. But in all this, they fall for each other and end up as a couple. How all this happens forms the rest of the story.

The romantic angle in the film is quite unique and happens mostly through conversation that has been written on a splendid note. The late Irrfan Khan plays the charmer yet again. For the heroine, his actions and behavior are annoying but for us, the audience is quite entertaining. On the other hand, Parvathy is amazing as the under-confident working woman who overcomes her fears. The dialogues in the film are pretty good and the songs have been set nicely into the narrative. The BGM is good and so is the camera work.

The story of the film is quite simple and has nothing much fresh to showcase. Director Tanuja deals with more of the behaviors and personalities of two people that can bore a section of the audience. The climax is simple and could have been more effective.

Overall Qarib Qarib Singlle is a film that has a breezy narration and interesting romance. The lead pair and their unique chemistry makes this film quite endearing in most parts. Barring the routine story, this film ends up as a great watch especially if you missed some of Irrfan Khan’s best works. Recommended.