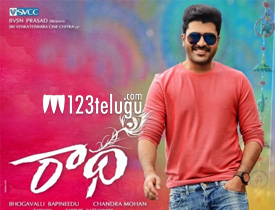 Sharwanand is in full swing with the super success of Shatamanam Bhavati. He is back with a commercial entertainer called Radha which has hit the screens all over today. Let’s see how it is.

Radha Krishna(Sharwa) is a fun-loving cop who goes to any extent to serve the department. One fine day, he is transferred to Hyderabad and gets into a tussle with a would-be chief minister Sujatha(Ravi Kissan).

Upon investigation, he finds out that Sujatha is a dreaded criminal who is trying to somehow bag the top post in the state. Rest of the story is as to how a small time cop like Radha manages to dethrone a powerful politician like Sujatha and stops him from taking the ultimate power.

Radha is undoubtedly Sharwa’s show all the way. The story and setting have been precisely made to take the young hero to another level and Sharwa does full justice and comes out victorious. He has convincingly performed all the traits of a true commercial hero and carries the entire film on his shoulders. Sharwa’s comedy timing, his romantic angle and serious avatar, everything has been showcased in a perfect manner.

Even though Ravi Kishan plays a role similar to his Race Gurram character, he does full justice to his part. The first half of the film has good fun with the romantic angle between Sharwa and Lavanya shown in a funny way.

Saptagiri’s comedy works in parts. Some confrontational scenes between Sharwa and Ravi Kissan have been showcased in a quite innovative manner. Shakalaka Shankar and Sharwa’s track is decent as well.

The story of the film is quite old and has nothing to offer. As said earlier, it is just to showcase the hero in a mass angle. The second half and villain’s track has traces of Race Gurram.

Once the twist is revealed during the second half, the last 15 minutes are quite predictable and routine. Lavanya has to seriously stop doing these traditional and normal looking characters as she is getting repetitive. She needs to reinvent herself and come out with something new.

Production values are pretty good as the film has been made on a decent scale. Radhan’s music sounds good with the visuals and his background score is apt. Dialogues are funny and have been written with a lot of wits. Editing is just about okay and so was the camera work. Sharwa has been styled nicely as he looks handsome.

Coming to the director Chandra Mohan, he has played a safe game and has narrated the film in a simple manner. There is absolutely nothing new in his story or narration but he scores full marks in showcasing Sharwa in a superb manner which holds the film together.

Overall, Radha is one film that has only been made to showcase Sharwa in a mass and commercial angle. While Sharwa passes the test with full marks, the film ends up as a routine and predictable watch for most of the time. There is nothing new that you will see in this film but as Sharwa has become quite popular of late, this film will bring in decent crowds because of its trademark fun and commercial elements.