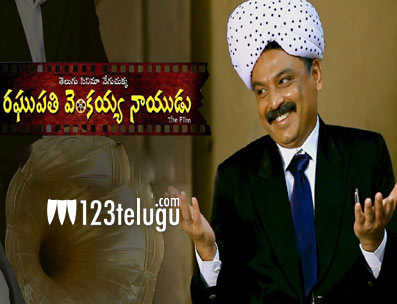 Right from his childhood, Raghupati Venkiah Naidu(Naresh) is always attracted to arts. He fights with his parents and lands in Madras. After struggling a lot, he somehow becomes a photographer. He even buys a Croma Megaphone and starts using it and develops the interest of the audience in films. He starts airing films through the touring tent procedure and this does not go well with the British people wh start torching him. The rest of the story is as to what all problems he faced in life and how he ended his life in his last days.

Naresh breathes life into the role of Venkiah Naidu. It is one of his best performances to date as the senior actor does exceptionally well in his complex role. The manner in which Naresh performed in all the emotional scenes is just exceptional and brings tears to your eyes.

The actress who portrayed the role of Naresh’s wife did a good job as well. Maharshi Raghava, who played a key role did well in his character. The set work and production design are top-notch in the film. The supporting actors also did well in their roles.

The makers did not do full justice to the life of Venkiah Naidu as many aspects were wrapped up in a hurry. The screenplay of the film is very slow and does not engage the audience for the most part. There was a good scope for the director to create drama but he missed out on it.

The proceedings are also very slow and many scenes create a boring effect for the audience. Yet another disadvantage is the predictable narration which does not create an engaging effect at all.

The production values of the film are just about okay. The camerawork of the film is pretty good and showcases the bygone era well. Editing is just about okay and so was the music. coming to the director Babji, he chose a good topic for making a biopic but his presentation and lack of serious drama bores the audience.

On the whole, Raghupati Venkiah Naidu is an old school emotional drama which fails to engage the audience. Even though there was enough scope for good melodrama, the director loses out on a good opportunity and makes the film boring and outdated. Only Naresh’s performance is outstanding.