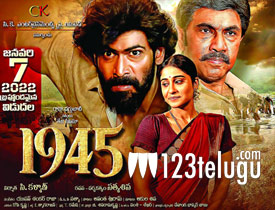 Rana signed a bilingual named 1945 way back in 2019. But the film got stuck in the making for a very long time and finally released today by C Kalyan. Let’s see how it is.

The story is set in Burma in the year 1945. Netaji Subhash Chandra Bose plans to launch the INA to fight the British. This is also the time when Adi(Rana Daggubati) comes back to Burma to take care of his family business. Upon his arrival, he gets engaged to a British Tasildar’s(Nasser) daughter (Regina). Just as he is set to get married, the atrocities of the British keep growing and Adi is forced to fight the British. What he did and how he faced the mighty British soldiers forms the story.

The basic point of the film and how it is set in the pre- independence era looks good. More than the narration, the visuals, production design and locations used are quite good.

Rana tries hard in his role and does well in the fight sequences. Saptgagiri, who plays Rana’s right hand evokes some fun. Nasser is impressive as the government servant.

Regina, plays a traditional role and is impressive and got scope to perform. Satyaraj is okay but did not get much screen time to perform.

1945 is directed by Satyasiva and is half baked. The basic emotions needed for any patriotic film are completely missing here. Every revolt planned by Rana against the Britishers looks forced.

There is no drama at all and as Rana had issues with the makers, he did not even dub for the film. This itself brings down the tempo from the first half itself.

In many of the scenes, Rana looks jaded and is not in the mood at all. The way things between the British and Rana’s revolt happens has no justification at all. There is no climax and the film is ended in an abrupt manner irritating the audience.

As said earlier, the production values of the film are pretty good. The locations and camera work showcasing the period setup are neat. Telugu dialogues by Akula Siva are good. Editing is dull as many scenes are ended in an abrupt manner.

Coming to the director Satyasiva, he has done a bad job with the film. His story has a good point but his narration lacks basic punch. A very serious drama is made to look silly with his direction.

On the whole, 1945 is an abrupt and illogical patriotic drama which lacks the basic punch. Rana sleep walks in his role and looks disinterested throughout. The film has been stuck in the making for years now and the dull and forces scenes prove the depressing attitude of the film. Ignore this film even if it comes on OTT.