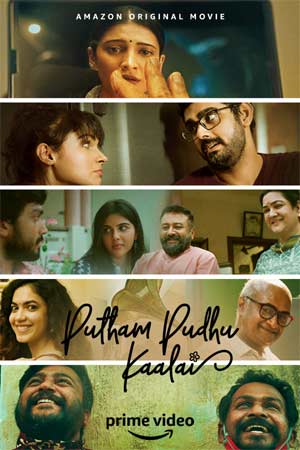 So, continuing the series of reviewing movies and shows during the lockdown period, our today’s pick is the latest Tamil film Putham Pudhu Kalai made by five noted directors. The film is available on Netflix and let’s see how it is.

The first story is directed by Sudha Kongara and features Jayaram and Urvashi who are seeking love at a mature age. Each of them has lost their individual partners and get to spend time together as the lockdown is announced. The crux of the story is as to how they announce their mature relationship to their kids.

The third story is directed by Suhasini Maniratnam and features Suhasini, Shruthi Haasan, and Anu Haasan. Two daughters played by Suhasini and Anu visit their ailing mother during the lockdown. How they bond as a family and bring back their mother to life is the whole story.

This story is directed by Rajiv Menen and is about two school friends Andrea and Gurucharan who suddenly meet during the lockdown. Andrea is a drug addict and how Guru helps her to overcome her habit is the whole story.

The Last Story is directed by Karthick Subbaraj and features Bobby Simha. He is a small-time goon who decides to rob a software company but gets in trouble because of a superb twist. What is that and how it is showcased is the story.

One of the biggest advantages of this anthology film is its writing. The emotions in each of the stories are solid and hold your attention until the end. The narration is quite detailed and yet does not look lengthy at all. Jayaram and Urvashi as the mature couple are superb. Their conversations and how they portray their mature love for each other is shown beautifully. Also, the small comic touch to the narrative brings a freshness.

The best story of the film is the one directed by Gautam Menen. The way he deals with a grandfather-grand daughter relationship is just awesome. M S Bhaskar is amazing as the old and caring parent. The conversation and how Ritu and Bhaskar recollect their difference is so good to see. The conversations are just amazing and bring a soothing effect on you. Ritu is awesome and holds your attention with her settled performance.

Suhasini Mani Ratnam and the bonding with her sisters in the third story is also good. The conversations between the elders and how things change when a family bond is showcased so well. Andrea is also good in the fourth story and this episode has a good performance by Leela Samson.

Miracle by Karthick Subbaraj ends the film with a pinch of salt. The thrills and twist in this short are very good. How the dots are joined and the thrill part is executed is so good to see. The production values of each story are top-notch. The BGM, camerawork, and other art department have done a terrific job. But what holds your attention is the solid performance by the star cast and amazing writing.

The film is based on basic emotions in life and that is the reason, there is no great story. So, do not expect a great storyline while you watch the film. Andrea’s story looks a bit stretched and could have been toned down a bit.

On the whole, Putham Pudhu Kalai is one of the best anthology series made in recent times. The association of big names, their solid performance, easy to understand Tamil, and gripping emotions make this film an endearing watch. Go for it and you will not be disappointed for sure.