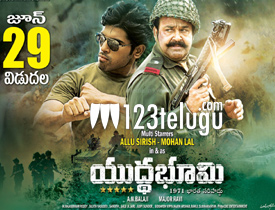 Mohan Lal and Allu Sirish starrer, Yuddha Bhoomi has hit the big screens today. The patriotic drama garnered decent expectations prior to the release, thanks to an intriguing trailer that promised an intense Indo-Pak war. Scroll down to see whether the movie matched the expectations laid on it.

Yuddha Bhoomi is a patriotic drama that is set out in 1971 India-Pakistan war backdrop. Vasudevan(Mohan Lal) is an Indian army officer who believes that a soldier should always keep his morale high and face the enemy with courage. He comes face to face against Pakistan army unit commander, A Raja(Arunoday Singh) who shares a similar ideology.

During the war, Vasudevan finds a key officer in the form of Chinmaya(Allu Sirish) but an unforeseen incident brings a massive twist in the tale. Can the Indian army defeat a stubborn Pakistan army unit? What are the troubles they face in the process? Watch the movie in theaters to know the answers.

Mohan Lal is at his usual best while portraying intense emotions and his maturity in complex episodes is a major advantage to the movie. He is seen in a dual role in the movie and he managed to show good variations from one role to another.

Allu Sirish looks fine as a young and aspiring army officer. He came up with a decent job in portraying the aggression of a young lad who desires to come on top of the enemy and does not care about the consequences.

The entire first half is dedicated for proper establishment of characters and a few family episodes featuring Mohan Lal have come out well. Arunoday Singh, who acted as a Pakistani army officer played his role well and his performance as a sincere commander who does not like the concept of war looks decent.

The movie takes its own time to get things going. The director, Major Ravi picks a novel storyline that has enormous potential, but he completely messes it up with an undercooked screenplay.

Things get sidetracked in the second half as the director’s desperation to put up a message supersedes the core concept of the movie. The war episode during the climax is easily one of the weakest action episodes in the recent times. One may wonder how could the director neglect such a crucial sequence in the movie.

The narration goes haywire towards the end as the viewer loses track of the proceedings. The never-ending second half gets into the nerves of the viewers as many scenes have been dragged unnecessarily.

The director, Major Ravi picked a good storyline but his uneven narration overshadows all the hard work that has gone into the making of the film. He handled the emotional part well but failed to bring an authentic feel to the action episodes.

Background music by Gopi Sundar is absolutely spot on. He takes a few scenes to a whole new level with his soundtrack that gives a patriotic feel to the viewers. Camera work is below par as the angles look confusing and the viewer may feel distracted for major portions in the climax.

On the whole, Yuddha Bhoomi is an undercooked patriotic drama that has a strong message but falls behind with its uninteresting narration. The movie has decent emotional content and strong characters. However, the lackluster screenplay damages the flow of the movie as a few crucial episodes in the second half have not been handled well. Finally, Yuddha Bhoomi ends up as a below-par watch and see minimal limelight this weekend.