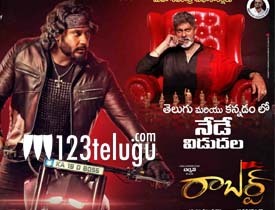 Kannada star, Darshan’s new film, Roberrt has been simultaneously released in Telugu with the same title today. Let’s check how it is.

Set in Uttara Pradesh backdrop, the film opens with the character establishment of a man named Raghava (Darshan). Being a worker in a food catering center, Raghava leads a simple and soft-natured life with his five-year-old son Arjun. One fine day, Raghava comes across a wicked politician named Tripathi(Ravi Kishan) and kills him under mysterious circumstances. Who is Raghava? What is his past? Why did he kill Tripathi? How a gangster named Nana (Jagapathi Babu) is interlinked with the story? That forms the story.

Looks-wise, hero Darshan is fit and impresses with his screen presence throughout the film. His makeover and variations in both the characters will be loved by his fans. Also, Darshan is decent in the getups of Lord Hanuman in the introduction song which has been shot lavishly.

The pre-interval fight sequence has been shot well. Darshan’s makeover as Roberrt in the second half and a few gangster scenes will be loved by the masses.

Star actors like Jagapathi Babu and Ravi Shankar are okay as baddies. Actors like Vinod Prabhakar, Asha Bhatt, Sonal Monteiro, and Aishwarya Prasad are apt in their roles.

Though the film is a revenge drama that is based on the friendship between two childhood friends, scenes related to it are not established in a proper manner.

Expect for the pre-interval fight, the entire first half has nothing new and runs on a flat note which is also a major minus for the film. After ten minutes into the film, the audience will understand that Darshan’s character has a sad flashback and they have no option but to keep on waiting for the sub-plots to get revealed. This delays the core point in the film.

Director Tarun Sudhir’s idea of making a film based on friendship is good but he totally failed in executing the concept with a gripping screenplay.

He should have worked in a better way in designing solid confrontation episodes between the protagonist and antagonist but sadly misused the golden opportunity. Editing by KM Prakash is just okay as he should have chopped close to ten minutes in the first half.

The cinematography by Sudhakar S Raj is decent as his work is visible in a few songs and action sequences. The background score by V. Harikrishna is good and so is the case with Arjun Janya’s music for songs. Production values for this star actor’s film are lavish.

On the whole, Roberrt is a regular revenge drama that revolves around the concept of friendship. Though a few scenes and action sequences in both the halves will be loved by the masses, the lack of a racy screenplay and slow-paced proceedings make it a below-average fare at the box office.