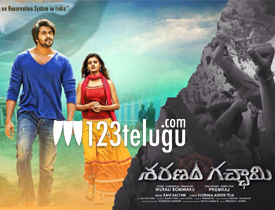 After facing a lot of trouble with the censors, Saranam Gachami is finally out in the theaters. Let’s see how it is.

Manav(Naveen Sanjay) is a young student who is quite upset with the way caste system, politics and corruption are ruling the country. During his PHD course, he chooses the same reservation system as his thesis topic.

Rest of the story is as to what kind of serious problems does this sensitive topic land Manav into and how does he come out of it is the whole story all about.

The basic plot of the film is quite good and how reservation system is being handled in the country has been handled quite well. The way the reservation system creates huge problems between the general public has also been elevated nicely. Also, the way loopholes in the Indian constitution have been discussed is hard hitting.

The social message that has been given through the film is worth applauding. How should the reservation work and who are the people misusing it, such issues have been handled cleverly.

Apart from the basic plot, rest of the basic story line is quite routine. Just to establish the hero’s character, the entire first half has been diluted completely with silly scenes. Also, the scenes featuring hero’s friends and family only deviate the serious topic of the film.

One more drawback of the film is the performance of the lead cast. When you have such a hard-hitting subject, one expects some strong performances from the lead cast which is completely missing in this film.

The climax of the film and how the hero solves major problems looks a bit over the top. Too many supporting roles have been introduced just for name sake. Hero’s love track has nothing new to showcase.

Ravi Kalyan’s music is below average. Editing is pathetic during the first half but the production values are pretty good. Coming to the director Prem Raj, though he had a hard-hitting storyline, his narration is quite amateurish. Films based on serious subjects need a racy screenplay but sadly, the director fails to make things interesting for the audience.

On the whole, Saranam Gacchami is a film which has some very hard hitting moments. Even though the film deals with a sensitive topic of reservation, the exact solution of how to eradicate it is not convincing enough. Though the film looks good on paper, the execution is half-hearted. Except for some realistic scenes featuring these problems, this film ends up as a below average watch this weekend.