Review : Shang-Chi and the Legend of the Ten Rings – Adventurous ride into a mythical world
Published on Sep 4, 2021 3:02 am IST 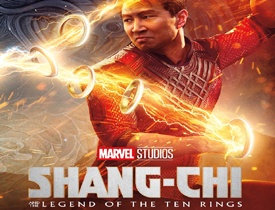 Marvel’s new superhero flick, Shang-Chi and the Legend of the Ten Rings, has hit the screens across India today. A lot of hopes are pinned on this big-screen spectacle to revive the box-office around the world. The film has been dubbed in Telugu to enthrall Marvel’s Telugu fans. Here’s our review of Marvel’s first Asian superhero film.

Xi Wenvu (Tony Leung) conquers the world with his superhuman powers the ‘Ten Rings’ and builds an indomitable secret society. He tries to enter a village named Tao Lao, home to many forces. But Ying Li (Fala Chen) prevents him from going to the village. They both fall in love, get married and give birth to son Shang-Chi (Simu Liu), and daughter Xu Xialing (Meng’er Zhang).

In a tragic turn of events, Ying Li is killed by Wenvu’s rivals. Unable to bear his wife’s loss, Wenvu again wears the Ten Rings. What kind of changes does this bring in Shang-Chi’s life? What decision does he make? Why did the Ten Rings leave the society? How does an ordinary young woman Katy Chen (Awkwafina) enter his life? What kind of twists happen in their lives? What is the connection between Shang-Chi and the dark cave in the Tao Lao village? You need to watch the film on the big screen to know the rest.

Just like all other superhero flicks, Shang-Chi and the Legend
of the Ten Rings, too, is high on action, adventure, emotions and spectacular visual effects. The action stunts featuring Shang-Chi, Xi Wenvu and Xu Xialing will leave the audience exhilarated.

The climax sequence and the splendid fights shot on Shang-Chi and his father Xi Wenvu will arrest the audience. The way Wenvu’s character was designed and the near-perfect make-up are quite impressive. The scenes featuring Shang-Chi and his sister Xu Xialing are intriguing to the core. Awkwafina’s bus driving scene will make audience clap and whistle in cinemas. The Telugu dubbing has been done close to our sensibilities. The performances of all the lead actors deserve a mention.

Even though director Destin Daniel Cretton starts off Wenvu’s superhero story on an interesting note, certain slow-paced scenes, including Shang-Chi’s initial portions, drop the momentum. Also, too much of emotional drama in a few scenes give us a feeling of watching a routine film.

Although the action part throughout is designed well, the climax sequence should have taken the overall experience to the next level. While all the main characters had their own conclusions, their lead portions should have been handled better.

Shang-Chi scores high on its technical front. Each and every craft excels in giving a thoroughly enjoyable superhero action flick. The top-class VFX take the audience into a world of mythical adventure. The cinematography, production design and background score are top-notch.

Being Marvel’s first Asian superhero film, a lot was riding on Shang-Chi and the Legend of the Ten Rings. And the film doesn’t disappoint and succeeds in comfortably surpassing audience’s expectations. Spectacular visual effects, action choreography and lead actors’ impressive performances together take audiences on an adventurous journey into a mythical world. Barring a few slow-paced scenes in the first half and the routine emotional drama, Shang-Chi has many positives going for it. You may certainly enjoy this fantastic thrill ride in cinemas this weekend.