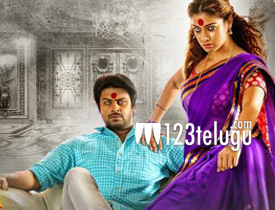 Okariki Okaru fame, Sriram and sizzling Kannada beauty Raai Lakshmi have teamed up for a horror drama titled Sivaganga under Vadivudaiyan’s direction. This Tamil dubbed drama has hit the screens today. Let’s see how the film is.

Siva (Sriram) and Ganga (Raai Lakshmi) fall in love with each other during their college days and plan to get married with their parents’ consent. Their love story comes to a tragic end when Godhra Seth (Suman), who lent Siva’s father some loan kills Siva, his family and Ganga.

Siva and Ganga become ghosts and take their revenge on Seth. The story has an interesting twist in the form of Shankar, who tries to win the ghost Ganga’s love. Who is this Shankar ? How do Sivaganga avenge their killings ? and what happens to Shankar forms the rest of the story.

The major plus points of the film are the love story between Siva and Ganga, villain’s track and the tragic killings of Siva and Ganga. Sriram and Raai Lakshmi give top notch performances and surprise the audience. The revenge track where the ghosts of Siva and Ganga avenge their death is executed nicely.

VFX work creates a huge impact in the film. Sriram’s villainous act in Shankar’s role and his characterization arrests the audiences big time. The interval twist raises the excitement levels for the film’s second half.

The director executed the back and forth narrative with total clarity. The main twist revealed in the second half, comedy scenes, and Suman’s villainous are impressive.

The film suffers mainly from lack of a strong story and audience will be disappointed with the routine drama. The done to death horror plot where lead actors become ghosts and avenge their killings hampers the viewing experience.

Also, the absence of refreshing revenge scenes makes this film like any other horror film. The film’s comedians irritate with their inane comic antics. Songs are major speed breakers to the proceedings. Climax is a major let down.

Srinivas Reddy’s cinematography stands out and creates the perfect effect in certain scenes. Coming to the director Vadivudaiyan, he has done a pretty ordinary job with the film. Even though he narrated some scenes well, the story and proceedings are quite routine and outdated. John Peter’s background score highlights the horror effect well. Editing is neat.

Nine out of the ten horror films which release these days, are based on some revenge story or the other. Same is the case with this week’s release Shiva Ganga as well. The film which has top notch performance by hero Sriram is quite outdated and has no thrilling horror elements at all and can be ignored completely this weekend.