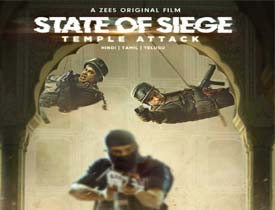 Continuing the trend of reviewing shows and films on OTT, our today’s pick is the Zee 5 Hindi film State of Siege-Temple Attack. Starring Akshay Khanna, let’s now see how the film is.

The film is based on the terrorist attack on the Akshar Dham temple in Gujarat, 2002. A few terrorists attack the temple and take many as hostages. The NSG commandos are brought in right away. The team is headed by Major(Hanut Singh) and the rest of the story is about how Hanut and his men gun down the terrorists by risking their lives.

The locations chosen for showcasing the Akshar Dham temple are quite good and create a tense atmosphere for the audience. The manner in which the film is started and the whole terrorist attack is executed is showcased in the best way possible. The first half of the film is quite gripping and has a good effect.

All the actors who played the terrorists are solid in their roles. Akshay Khanna is back in the game with an action avatar and he does well as an NSG commando. He is the mainstay of the film and does well in the action sequences. The fights and the way NSG deals with the terrorists have been showcased well.

One of the biggest drawbacks of the film is its predictability. You exactly know what is going to happen next as all the scenes are quite predictable and routine. The canvas is big but the narration does not grip you that much.

After the first half, the makers run out of ideas and the plot does not move much and has no twists. The ending is also quite routine and the other supporting cast looks dull. Some known actors would have made things even better.

The emotional content in the film is missing in the second half. There are a few logical errors as the maker has taken things for granted in the way a big terrorist is left alone to save the people of the country.

The camerawork is good as the visuals are neat. The action part is also good and so were the dialogues. The production design is top-notch and so was the BGM of the film. Coming to the director Ken Ghosh, he has picked up a popular incident and tried to weave a story around it. He has managed to showcase some good thrills in the beginning but in all this, the emotion and ending are rushed leaving a mixed feeling for the audience.

On the whole, State of Seige-Temple Attack is a film that has a familiar premise and routine action. The first half is gripping with good thrills but the second half goes for a toss and the ending is rushed and predictable. All those who like hostage dramas can give this film a shot but the rest can take it easy and look for something else this weekend.