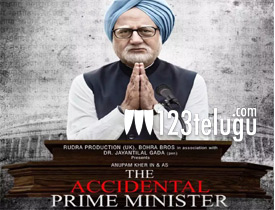 The trailer of The Accidental Prime Minister created a lot of controversies from the time it went on air. Anupam Kher’s act as Manmohan Sigh evoked interest among the audience and the Telugu version of the film has hit the screens today and let’s see how it is.

The film starts off when Congress president Sonia Gandi decides that Manmohan Singh played by Anupam Kher should become the prime minister of India after winning the elections in 2004. The film is told through the eyes of Manmohan Singh’s then media advisor Sanjay Baru(Akshay Khanna). The film is all about how Manmohan Singh stood his ground in spite of many internal political pressures from the Congress party and what he did was best for the good of the country.

Anupam Kher nails it as Manmohan Singh and has emulated the former PM in a superb manner. Be it his walk, or the way he spoke, everything was so good to see on screen.

But the highlight of the film was Akshay Khanna through whom the film is told. His character has been established in such a way that it reveals how the government is run and what happens internally and how Manmohan Singh did not get to do much. Akshay Khanna did a superb job as Sanjay Baru.

The manner in which Manmohan Singh went through all the pressures during the nuclear deals with the US and how he was sidelined and eventually emerged on top has been showcased well.

The first half of the film is started well and all the scenes between Anupam Kher and Akshay Khanna have been executed nicely. Some key scenes where Sonia Gandhi did not want Rahul to take up the post of party president during the various scams have been executed bravely.

One of the biggest drawbacks of the film is that it lacks gripping drama in many places. The director had several scenes to play with the screenplay and showcase certain incidents in a realistic manner but that did not happen as the film is mostly politically correct.

There are a few scenes which showcase the Congress government in a bad light and all those scenes are showcased through the side characters and this does not give the film the necessary effect.

The first half ends on a good note but the second half does not have much clarity and ends in a jiffy. What problems did Manmohan go through and why he wanted to resign as the PM and how Rahul was made the PM candidate in 2014, all this has not been showcased well and this is where the film goes down.

Most of the shoot has been done in London and the production design needs a special mention as they have managed to get the office of the PM to look authentic. The background score is pretty good as it elevates key decisions in the film on a good note. Dialogues are not that great and could have been more gripping. Editing is neat as the film a simple and crisp run time. The Telugu dubbing done is pretty decent enough as the voices chosen for different actors in the film suit them well quite well. Never you get a feel that you are watching a dubbing film.

Coming to the director Vijay Ratnakar, he has chosen a very daring subject as his first movie and managed to get the premise and looks of the key characters well. He also starts the film in a gripping manner and ends the first half well. But as he had too many obstacles to showcase the actual truth, he just wrapped up the film through the supporting cast of the film. There are not many conversations between Sonia Gandhi and Manmohan Singh as the film was more about what Manmohan Singh felt about his position which is showcased through Akshay Khanna’s role.

On the whole, The Accidental Prime Minister is a daring attempt at showcasing what went through India’s most famous and controversial Prime Minister during his term as the head of the country. The performances from Anupam Kher and Akshay Khanna are top notch but the necessary drama and facts showcased are not that gripping. All those who want to know what Manmohan Singh went through on a personal basis as a Prime Minister can give this film a shot but there is nothing authentic or gripping regarding the Congress government which has been taken a few digs at in this movie.