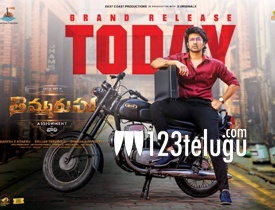 The theatres are open finally and today, a film called Timmarusu has been released. Starring Satyadev in a lead role, let’s now see how the film is.

The film begins with the murder of a cab driver(Chaitanya). But the goons frame an innocent youth named Vasu in this case and he gets eights years in jail. Lawyer Ramachandra(Satyadev) comes into the picture and gets the case reopened. Who killed the cab driver? Why is Vasu made a scapegoat and where do the roles of Priyanka Jawalkar and Brahmaji fit in this setup. That forms the rest of the story.

It is a known fact that Satyadev is a solid actor and he proved it once again with this film. Timmarusu takes him a notch higher in his career as Satya showcases his massy side as well. Be it the fights, dialogue delivery, or emotional scenes, Satya has rocked the show and is the stand-out performer in the film.

Brahmaji is a versatile actor and he proved it once again with this film. He plays a great supporting act to Satyadev and especially, his comedy was quite good and evoked decent laughs in the film. Jhansi does a good job in her role. Ajay is pretty good as the cop. The actor who played Vasu was also quite effective in his role.

Priyanka Jawalkar looks good in her role. The thrill factor in the film has been managed well for the most part. The villain angle, twists in the second half were impressive. The director managed to narrate the film in an engaging manner and ended it in a convincing manner.

One of the biggest minus points of the film is the over build-up that is created in many scenes. Right from highlighting the hero and crime scenario, things are hyped for no reason. In a few areas, the logic goes for a toss. Things should have been taken in this aspect.

The heroine’s track in the film looks weak and could have been better. This derails the film a bit and makes the proceedings slow. Also, the first half could have been packed a bit more gripping to make things effective.

The production values by Mahesh Koneru were pretty good. The film has slick camerawork and showcases the court set up quite well. The music of the film is decent but the BGM by Srichanran Pakala was quite effective. The editing is good and so was the production design.

Coming to the director Sharan, he did a decent job with the film. The basic suspense of the film has been kept alive and this is where the small glitches in the film get covered. Had he made the first half a bit better and avoided unnecessary elevations, things would have been quite effective.

On the whole, Timmarusu is a relevant crime drama with an interesting backdrop. The thrills and suspense have been maintained for the most part. Apart from a few logical issues here and there and the slightly slow first half, this film has a solid performance by Satyadev and makes up for a decent watch this weekend.