Review : Uttara – A mismatch of horror and love 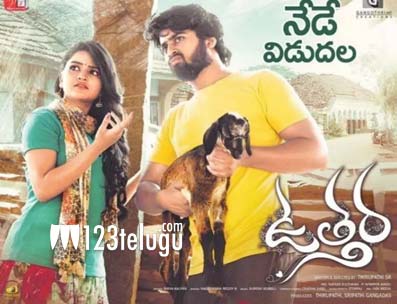 Along with a bunch of small films, yet another film titled, Utthara, a horror-thriller has also hit the screens today. Let’s see how it goes.

A jobless guy named Ashok (Sriram) and Swathi (Karronya Katrynn) who belong to the same village fall in love with each other. But they face trouble in the form of Swathi’s father, who insists Sriram to earn money first for the finical security of his daughter. In order to earn easy money, Sriram, along with his friends enter an old house owned by Utthara. Who is this Utthara? Why did the friends enter her house? Will the friends succeed in grabbing huge money from the house? That forms the story.

The chemistry between the lead pair and romantic scenes between them are executed nicely. In the first half of the film, the funny and comic conversation scenes between the friends’ gang are impressive in typical Telangana slang. Hero Sriram is okay with his acting skills but he needs to improve a lot in further films.

Coming to the heroine Karronya, she is the main highlight of the film as her cute looks and expressions will impress the audience very much. Comedian Tillu Venu is fine in his character as a small-time chief and evokes good fun with his dialogues. Four persons, who acted as the hero’s friends are okay in their roles.

After a breezy narration in the first half of the film, the director totally goes out of the syllabus during the latter half by inserting forced horror elements. After watching the film one common question flashes in the audience mind is that why the makers have titled the film as Utthara. They completely neglected the detailing about the girl’s character and her backstory.

All the horror scenes in the second half failed to create an impact and so did the screenplay. The graphics and VFX work in the second half also looks cheap making the film look bad in many areas. The emotions showcased also look fake in several scenes.

Cinematography by Charan Babu is good as he tried to bring an authentic flavor while showcasing the village locations and atmosphere. Editing work is just about okay. Dialogues by Shiva Kalyan are good. Music by Suresh Bobbili is okay as a few songs and background score clicks. Production values for this low-budget film are adequate.

Lastly, director Thirupathi SR tried his hand in the horror-comedy genre and failed to succeed. Instead of making the film as a half-baked horror drama, he should have written a better love story by continuing the feel of the first half in the later parts as well.

On the whole, Utthara is a misguided horror-thriller that fails to click. Though the love scenes in the first half and a few comedy punches click, the forced horror element in the second half dilutes the film completely making it a below-par watch this weekend. Look for something else interesting.