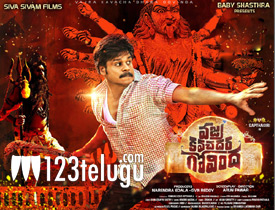 Comedian Saptagiri is back with yet another film of his titled Vajra Kavachadara Govinda which has hit the screens today. Let’s now see how the film turns out to be.

Govinda(Saptagiri) belongs to a small village where people keep dying because of cancer. He tries to help them through the local MLA(Archana) but gets cheated in a big way. One fine day, in a dramatic turn around of events, he finds out about a treasure and tries to find it so that he can use it for the good of the people. Rest of the story is as to what problems did Govinda face in his journey and found a permanent solution for the people of his village.

Saptagiri does a good role in the film. His comedy timing is good and Saptagiri does well in scenes related to finding the treasure. His body language suits the script and he carried the film on his shoulders. Heroine Vaibhavi Joshi was impressive with her act. She looked decent and also emoted well in crunch scenes.

Comedians Srinivasa Reddy and Venu enter the scene in the last half an hour and create a decent impact on the film. The rest of the comedians also did well in the film. The guy who played Bangarayya’s role was also very good in his character. One scene where a small kid dies of cancer is showcased in an emotional note.

The second half gets messy as there is no direction in the narration and way too many characters are introduced one by one. The makers have taken too much time to establish the actual plot in the film and because of this, so many unwanted scenes have been thrown at the audience.

Too much focus was out on to elevate Saptagiri as the action hero. Many fights were just put to showcase him as a big hero which looked silly and over the top. There are certain scenes which do not have any logic at all and come just for the sake of it.

One can say that the director did not use the content properly and made the film go haywire. There should have been more focus on the emotional chord of the film which is the cancer disease which was totally missing.

Music of the film is just about okay as one song was good. BGM was the over the top in many areas. Editing of the film is decent enough and so was the production design. Production values of the film were top notch as the makers spent decent money which was visible on screen.

Coming to the director Arun Pawar, he did a below par job. What he had written on paper and what was showcased in the film is different. Too much scope is given to the commercial aspects and
Sapatagiri and because of this, narration goes for a toss.

On the whole, Vajra Kavachadara Govinda is commercial drama which does not have anything going its way. The plot is weak and the treatment is even more disappointing. Except for Sapatgiri’s sincere performance and some comedy, this film falls flat in many aspects. So, keep your options open this weekend and watch the film when it is aired on TV.