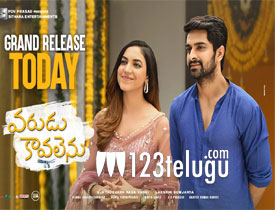 Varudu Kaavalenu has been promoted a lot in the last few days. The film starring Naga Shourya and Ritu Varma has released today and let’s see how it is.

Bhumi(Ritu Varma) is an independent woman who is not interested in marriage. In comes Akash(Naga Shourya) to her company as an architect and falls for Bhumi right away. Right when he decides to reveal his love for her, Bhumi rejects Akash right away. She has a solid reason for doing this but does not reveal it to Akash. What is that reason? and how did Akash handle this breakup and win Bhumi’s love is the basic story.

Varudu Kaavalenu is filled with beautiful moments and sensible romance. This is not the regular boy meets girl romance but showcases mature relationship between a 30 year old couple. This makes the proceedings sensible and classy.

Naga Shourya is in top form when it comes to love stories. He is handsome in his new look and performs superbly. The way he showcases subtle emotions throughout the film is very good. Naga Shourya has a big role and brings a lot of depth to the film.

Ritu Varma gives her career best performance and is amazing as Bhumi. She gets ample scope to perform as the lady with attitude issues and Ritu does so well. She looks beautiful in sarees and this film will surely be a game change for her.

Senior actress, Nadia is very good as the possesive mother. Vennela Kishore, Saptagirl provide good comedy in both the halves. Himaja is good in her role and so was Praveen. Murali Sharma does his supporting role well.

Yet another major asset is the amazing dialogues by debutante Ganesh Ravuri. They are simple, sensible, and bring a lot of depth to the film. The conversations between the lead pair are crucial and they are highlighted so well by the contemporary dialogues.

Though not a big drawback but the pace of the film is a bit slow. The proceedings take their own sweet time to get unleashed and this can bore a section of the audience.

Also, there is not much story in the film and the second half is a proof. Just to cover the lag, the makers add comedy scenes which luckily work.

Production values of the film are top notch as the film looks contemporary and colorful. Ritu Varma and Naga Shourya have been designed superbly in both the time zones.

Camera work is pretty colorful and so was the supporting cast. Yet another asset of the film is the decent music. The songs are neatly composed and do not obstruct the flow of the film.

Coming to the director Lakshmi Sowjanya, she makes an impressive debut. Her writing, characters, and emotions are strong and hold the film together. She handles the love angle in a mature manner and narrates the film with a lot of class. She is surely here to stay.

On the whole, Varudu Kaavalenu is a mature love story filled with strong emotions. Naga Shourya and Ritu Varma steal the show with their solid performances. Barring the slow pace, this film has sensible romance, moving dialogues, and timely songs making it a good family entertainer this Diwali season. Go for it.