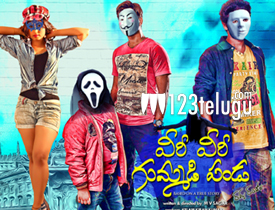 Continuing with the trend of low budget films, yet another horror comedy, Veere Veere Gummadi Pandu has hit the screens today. Let’s see how it fares at the box office.

Chitti(Rudra) and Babu(Sanjay), who belong to a close knit family buy a sprawling bungalow which was once owned by a super star. The entire family shifts into this bungalow and spends some precious times together.

As time passes by, their family starts encountering some weird incidents in the bungalow. After a point, a evil spirit also causes huge problems to the family only to make things worse. What is actually happening in the bungalow ? Who is this evil spirit ? and how does the entire family come out of these problems ? That forms the rest of story.

One of the biggest assets of the film is the pre-interval and interval block. The way certain suspense elements have been showcased during this time is good. Also, the pre-climax part has also been handled well.

The twist that comes during the climax is impressive. The lead which hints towards a sequel is executed nicely. Rudra is the best of the lot and gives a decent performance. The child artists who have done crucial roles also impressed nicely. Comedy by Posani and Raghu Babu is okay in bits and pieces.

Barring the climax, the movie falls flat right from the beginning with loose ends. The characters were misplaced, the comic timing was wrong and the element of surprise was altogether missing. The film emulates the format of ‘Raju Gari Gadi’ albeit without any comedy or horror.

The heroine Vennela looks beautiful and had showcased her glamour well but fails to impress with her acting abilities. The songs are randomly placed while the music was crude to listen. On the whole, the films lacks all the emotions it promised to deliver.

The movie’s technical aspects are perhaps the saving grace. The cinematographer did justice to his part by elevating scenes which in actual are just average. Coming to the music rendered by P.R, apart from the song ‘Vennela’, no other song strikes a chord with the audience. Also, the background score failed to impress big time.

The production values, making, and direction are all plain without any elements of thrill to them. The director M.V Sagar’s vision and viewpoint could not be seen through with the exception of climax. The film could have been better if the plot was as interesting as the end.

On the whole, Veere Veere Gummandi Pandu falls in no man’s land. The story, execution and performances, none of them entertain you at any point of time in the film. Except for the interval and climax part, this film is a lacklustre approach towards film making and can be easily ignored this weekend.