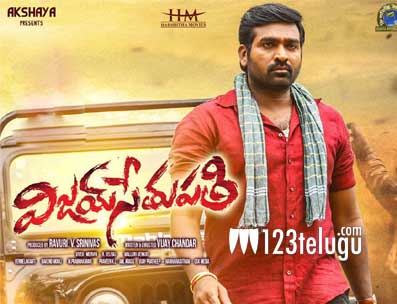 Vijay Sethupathi’s latest outing, Sangha Tamizhan has been dubbed in Telugu as Vijay Sethupathi. Directed by Vijay Chandar, the film has hit the screens today. Let’s see how it is.

A budding actor named Charan(Vijay Sethupathi) comes across Kamalini (Raashi Khanna), daughter of a rich businessman(Ravi Kishan) at a pub. Eventually, a friendship blooms between them and when things seem to be going fine, a different side of Charan as Vijay Sethupathi is revealed during the interval. Who is this Charan? what is his violent past as Vijay Sethupathi? How does his past involving Rani(Nivetha Pethuraj) and wicked politician Chittibabu (Ashutosh Rana) trouble him? To know answers, watch the film on big screen.

Undoubtedly, the film is a one-man show by Vijay Sethupathi. The star actor carries the film on his shoulders with his electrifying screen presence. A few mass elevation scenes canned on him will be a treat to watch for his fans.

Heroine Raashi Khanna is captivating on screen and did her supporting role quite decently. Yet another heroine, Nivetha Pethuraj’s character comes during the crucial flashback episode. She is good as a village girl and did the given role naturally.

Noted comedian Soori is fantastic as the hero’s friend and evokes hilarious fun. Other actors like Ravi Kishan, Ashutosh Rana, Nassar and Tulasi are apt in their given characters.

The main drawback is that the film has a very predictable and age-old story line which we have come across in many commercial films in the past. It’s not that the film is a bad but the routine template and flat narration with expected twists will not go well with the audience.

The way Nassar’s character has been showcased and the process of him becoming an MLA is hurried up with not so convincing narration. The same is the case with Ashutosh Rana’s role. His character as a mischievous politician is not designed in a proper manner.

Looks like director Vijay Chandar heavily banked on the popular saying old wine in a new bottle as the film has nothing new to discuss. Instead of focusing on the hero elevation scenes, he could have concentrated on writing a better story line with an engaging screenplay.

The Telugu dubbing artists, who dubbed for all the roles in the film did a nice job as their work is impressive. Editing is decent but the film should have been scissored for almost 15 minutes. Cinematography is good as the variations in the plot are captured well.

Songs wise, Vivek-Mervin’s music is nice as three songs are good on screen. But the duo disappoint with their unbearable background score which is too loud and irritating. Production values for this limited budget film are okay.

On the whole, Vijay Sethupathi is a routine masala entertainer that lacks novelty in it. Though Vijay Sethupathi’s acting and his chemistry with Raasi Khanna in the first half are good, predictable narration and underwhelming direction make it a below-average fare at the box office.