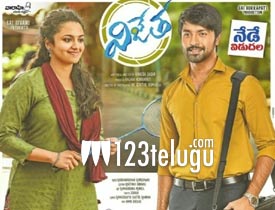 Yet another hero from the mega family, Chiranjeevi’s son-in-law, Kalyaan Dhev has come out with his debut film Vijetha which has hit the screens today. Let’s see how it is.

Srinivasa Rao(Murali Sharma), who is a talented photographer sacrifices his passion and keeps his family before everything. But his son Ram doesn’t understand this and keeps wasting time by chilling with his friends. An unexpected twist creates a massive rift between the father and son. Rest of the story is as to how Ram becomes responsible in life and wins his father’s respect back.

You cannot imagine Vijetha without Murali Sharma. The entire film is centered around him and boy, he moves you emotionally with his amazing performance which will connect with every father and son. Murali Sharma’s performance in the climax is just amazing and will surely move you to tears.

Mega hero, Kalyan Dhev makes a decent debut. Even though he looks rugged during the start, he eases out and performs well in the second half. Kalyan has a decent screen presence and will surely improve with time as he has good support in the form of the mega camp who will select good projects for him. The message of kids taking care of their parents when it matters the most during the old age is good and will inspire many.

The thought of son making his father’s dream come true is executed well. The climax lifts things in a big way and gives the film a very emotional and happy ending.

As it is the debut film of Kalyan Dhev, the makers have selected a simple and outdated story of how an irresponsible son realizes his duties in life. There are many films which have come in this genre.

The second half is where the film wobbles a bit as there is no strong conflict point as things become way too easy for the hero. The scenes featuring Satyam Rajesh and how the gang goes about doing their gifting business look unnecessary and sidetrack the film. Also, the love track is weak and has no meaning in the film.

Production values of the film are good. Camera work by Senthil is decent as it showcases the middle class set up in a good manner. Dialogues are meaningful and especially those written for Murali Sharma are top notch and relatable to the middle class setup. Music of the film is just about okay but the background score was impressive during the climax. Editing wise, certain scenes related to Satyam Rajesh needs to be trimmed right away.

Coming to the director Rakesh Rishi, he has done a decent job with the film. Even though he chooses a routine story, he adds good emotions at the right intervals and this is where the film clicks. But, If he would had added more drama between the father and son, things would have been even more exciting for the audience.

On the whole, Vijetha is the story of a father and son with a good underlying message. Kalyan Dhev makes a decent debut and if he chooses his project well, things look good for him. On the other hand, storywise, there is nothing new that you not seen before. But Murali Sharma’s extraordinary performance will connect with all the family audience and make them feel good while coming out of the theaters.