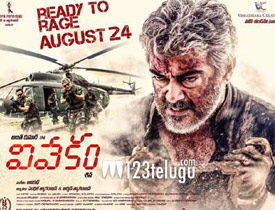 Even though Ajith is a huge star in Tamil Nadu, he is not that popular in Telugu states. His much-awaited action entertainer, Vivekam has finally hit the screens today. Let’s see how it is.

Ajay Kumar(Ajith) is a top secret agent in Europe. He along with his team deal with some high profile cases in the world. One fine day, they are handed over a case which involves several top level international criminals. Ajay Kumar cracks down the case and right when the time he gets hold of an important clue, he is suddenly shot and framed as a terrorist who is behind all this. What is this case? Who is the black sheep behind all this? and where do Kajal and Vivek Oberoi feature in this setup? That forms the rest of the story.

Vivekam only works because of Ajith’s hard work and dedication. He single handedly rallies the film on his shoulders and is top class in every way. Ajith’s hard work shows in every scene and it will be a treat for his Tamil fans as he has been showcased in a superb way. There are so many thigh slapping moments for fans and Ajith does not disappoint in this department.

Vivek Oberoi looks stylish and plays his role quite convincingly. Kajal looks gorgeous in traditional attire but she does not have much to do. The action episodes in the film are top class and have been executed quite well. Production values are superb as the film looks by international standards in many areas.

Even though the action episodes are good, the background score is so loud that you get an instant head ache. The film does not have clarity at all. Even after half an hour into the movie, you cannot figure out what is Ajith’s job and the mission he is on to. The director should be blamed for this as he narrates the film in a hurried manner.

Too much of action can get to you after a while. There is no proper drama in the film as the second half has some lags. There are some logics which go missing during the second half. It is very hard to believe that the entire police force in Europe cannot gun down one man as Ajith keeps moving freely targeting his enemies.

For Telugu audience, things can get boring as the film has a video game kind of a feeling most of the time. The way Kajal’s role is showcased during the climax looks silly and over the top.

Vivekam is top notch in terms of technical aspects. The film looks no less than a Hollywood film as the camera work captures the action scenes and foreign locations supremely well. Music by Anirudh is a disaster and so was his loud background score which irritates you to no extent. Dubbing done for Telugu sounds okay. The art work is top class and so were the production values.

Coming to director Siva, his script looks apt on paper but his execution leaves a lot to be desired. Even though he had a good story, his emphasis was only on Ajith and in all this, he lost out on the screenplay and only focused on the action part. This made the film a bit over the top and boring most of the times.

On the whole, Vivekam is a loud action entertainer which works only for Ajith fans. If not for his hard work and stylized action, the film would have been even more dreadful. Lack of basic clarity in the narration can leave you clueless during the first half. The audience in Tamil might love Ajith and his six pack, but for our general Telugu audience, this film ends up a tedious watch this weekend. Watch it if you only like Ajith.