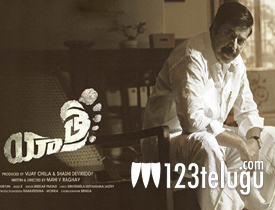 Yatra is one film which is being awaited eagerly as it is the biopic of late Rajasekhar Reddy. Mammootty plays YSR in this film which has hit the screens all over today. Let’s see how it is.

The story is all about YSR(Mammootty) and how he went on a Padayatra before the historical 2004 elections. The film showcases what problems YSR faced in his journey and how he won the elections victoriously by announcing several policies which won the hearts of many.

There was a lot of hue and cry when the makers chose Mammootty to play YSR. But boy, he is the heart and soul of Yatra. The national award winning actor has given one of his best performances and portrays YSR’s role in an emotional manner. Be it his dubbing, body language or the manner in which he showcases the pain throughout the film is superb and is the mainstay of Yatra. No one other than Mammootty could have played this role better.

What impresses you even more in Yatra is the emotional thread which is maintained throughout the film. The audience will completely connect to the emotions as they are real and showcase human values in a gritty manner. Rao Ramesh as KVP is superb and ably supports Mammootty in the film.

Jagapathi Babu is neat as Raja Reddy and so was Sachin Khedekar as the senior congressman. The small tiff’s between YSR and Congress leaders have been showcased in a gripping manner. The actress who played YSR’s wife is top notch. Even though Anasuya did a small role, she was flawless.

Dialogues need a special mention as the film is filled with meaningful monologues reflecting the pain which the common man faces in his daily life. The manner in which YSR introduces all the policies like Arogyasri has been established through some emotional scenes which will move you to tears.

As the film is an emotional journey of YSR many might get a feeling that it is a clear propaganda film. Also, the digs taken at TDP party should have been avoided as there were absolutely no need scenes mocking Chandra Babu as they show TDP in a bad light.

The film is devoid of all commercial aspects and today’s younger generation who is least bothered about the past might find the film slow and boring at times.

After watching the film, you can clearly understand that a lot of research has been done as real-life incidents have been brought to life in a beautiful manner. Production values by Vijay Chilla are top notch as the film looks real and rooted. This set up has been elevated even more by superb camera work which shows the Padayatra in a magnanimous manner.

As said earlier, dialogues elevate the film to another level altogether. Music by K is decent but his background score is terrific as every scene in the film is given a soul through his music. The production design, casting, locations chosen, are perfect and bring an authentic vibe to the film. Special credit should go to the dubbing department for working hard on Mammotty’s diction which is spot on.

Coming to the director Mahi V Raghav, he has given his life and made the film in a superb manner. Mahi catches on to the emotional aspect of YSR’s political journey and the rest of the scenes follow just like water. The manner in which he uses Mammootty’s charisma and showcases him in a magnanimous way makes the film click big time. After a point, you forget that Yatra is a propaganda film as what hits you are the moving emotions.

One the whole, Yatra lives up to all the expectations laid upon it. The film is an emotional tribute to YSR and showcases his historical Yatra in a moving and realistic manner. The film is not a regular political potboiler and will surely draw mixed reactions from various sections of the audience. But such realistic biopics which show harsh realities of life need to be encouraged. Box office wise, we need to see how the film does but Mammootty nails it as YSR and takes you on an engaging journey of human emotions which arrest you completely. Recommended.