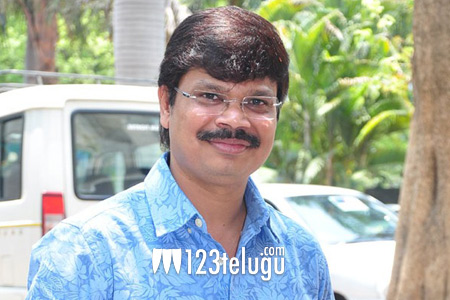 Boyapati Sreenu, is one director who raises the bar high with each film. The way he has showcased Allu Arjun in his latest film Sarrainodu has become the talk of the town. Today, also happens to be his birthday and on this occasion, we caught up with him for an exclusive interview. Let’s see what he has to say.

Q) Firstly, many happy returns of the day. How are you enjoying your day ?

This birthday is hugely special as my film Sarrainodu has become the talk of the town and is running to packed houses.

Q) How is the response to your film ?

The response has been wonderful and the film is carrying superb talk all over the two Telugu states. I am getting a lot of calls from the distributors and they are extremely happy with the way the film is running to packed houses.

Q) Were you disappointed with the mixed response on the first day ?

No ! not at all. The mixed response was only from a certain group but the actual audience loved the movie. In today’s time, if the film is not good, the collections will reflect right away on the second and third day. But the collections are steady and the common audience are loving the film. I feel that they are the right people who make or break a film.

Q) How is the response from within the industry ?

Frankly, the response has been mixed but all those who have called me just loved the film and praised me for my work. They also congratulated me for showcasing Bunny in a powerful and mass role.

Q) What was the best compliment you received so far ?

After watching the film, Chiranjeevi garu told me that he was surprised to see Bunny in such a dominating role and congratulated me for my work. This was a huge compliment for me as from the day one, my only aim was to showcase Bunny in a new avatar.

Q) What was the thought process behind showcasing Bunny in such a mass avatar ?

I had this thought from a very long time but Bunny was busy with other films. Now that he has attained certain stardom and craze, the time was right to take him to the next level.

Q) What made you choose Aadi as the villain ?

Right from time I wrote the script, I was very sure that the villain should be very special. After a lot of research, I finalized Aadi’s name and everything fell into place once he agreed to do the film.

Q) What do you have to say to those who feel that there is a lot of violence in Sarrainodu ?

Right from my first film, all my fights have been planned very carefully. The action packages gets heated up only when certain emotions get elevated in the film. Once you go with the flow of the film, you will never feel that there is too much blood shed.

Q) When can we expect different films from you ?

For sure, I will do some fun films and love stories in the future. As a director, I will attempt all kinds of genres.

Q) What do you look for when you pen a script ?

The main factor that I keep in mind is the basic emotion. I try to weave a story around one emotion and add some hardcore family and mass elements to the story.

Q) Tell us about your upcoming projects ?

As everyone knows, I will be directing Bellamkonda Srinivas in a youthful love story with my kind of mass elements.

With that, we ended our conversation and wished Boyapati hearty congratulations on Sarrinodu’s success and wished him the best of luck for his future.