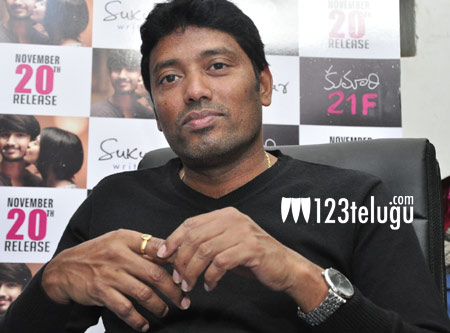 Ratnavelu, is one of the towering personalities in South India. This ace cameraman has worked on several big budget films in the past. But one of his latest works which has caught the attention of many is Kumari 21 F. This youthful entertainer is up for release tomorrow and on this occasion, we caught up with Ratnavelu for a brief interview. Let’s see what he has to say.

Q) What made you associate with Kumari 21 F ?

Everyone knows that I share a very close relationship with Sukumar. The moment I heard that he is producing this interesting flick, I had to be a part of it. Also, the emotion in the film connected me big time and I took it as challenge to showcase the film in a grand scale with minimum budget.

Q) Tell us about the camera work of this film ?

We kept things simple and used natural lighting most of the time. We chose locations in such a way that would help us in bringing out beautiful emotions in quite a natural way.

Q) How do you approach a scene ?

Firstly, I need to know the entire script and every detail about the characters. Then, I look at the location in which I have to shoot and then colour co-ordinate with the costumes of the stars and props in the set. If everything goes as planned, I start filming.

Q) How do you update yourself with the latest technology in film making ?

I read a lot and surf the net quite often. Also, I keep tracking all the new things which are going around in the industry and see how the latest technology helps me in my projects.

Q) What do you have to say to the reports that there is a lot of adult content in the film ?

There is absolutely no adult content in the film. Even though the film got an ‘A’ certificate, it is for a different reason. The entire youth will connect with this film big time.

Q) Finally, reports reveal that you did not charge even a penny for the film. Why ?

Sukumar is like family for me. Whenever he is trying something new, it is my responsibility to give him full support. Money is secondary and work satisfaction and creativity is more important.