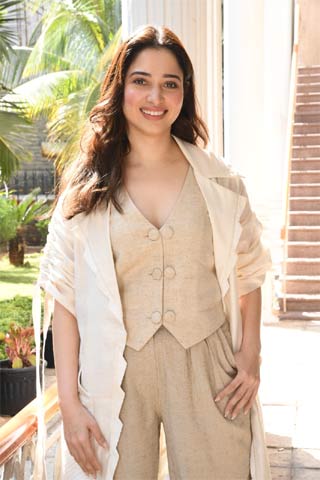 Tollywood young actor Satya Dev’s next release is Gurtunda Seetakalam on December 9, with Tamannaah Bhatia as the female lead. In addition, Megha Akash, Priyadarshi, and Kavya Shetty are playing key roles. Kaala Bhairava is composing the music. The film is directed by Nagashekar R and is produced together by Bhavana Ravi, Nagasekhar, and Rama Rao Chinthapalli. Ahead of the film’s release, we interacted with Tamannaah for a brief interview. Here is the transcript.

How challenging was the role for you since it’s a remake?

It isn’t new for me to act in a remake. But I make sure the originality isn’t missed. Since the audience would have already seen the film, I took it as a challenge so that the audience won’t feel bored watching the movie.

How was it working with Satya Dev?

I am feeling happy to act with Satya Dev. After watching his natural performance in Uma Maheshwara Ugraroopasya, I was very interested in sharing screen space with him. After getting the chance for this film, my desire to act with him got fulfilled.

What’s your opinion about OTT?

Even though the impact of remake films came down after the surge of OTT, audiences are always ready to watch when good films come. Even I am acting for OTT platforms, and I feel that OTTs are another platform to showcase our talent.

How do you feel as Gurtunda Seethakalam is being compared to Geethanjali?

I am feeling happy for comparing Gurthunda Seethakalam with Geethanjali. As people are comparing our film to a classic movie, the expectations have now increased, and I am confident we will reach them.

What about your marriage life?

Every girl in society faces pressure about marriage, even my parents constantly ask me the same thing. They are looking for alliances. I didn’t take any decision as of now, and I won’t take the social media rumors and comments seriously. Writing such things is part of their life, and acting is part of my life. So I won’t think about the memes as well.

Do you stick to any specific language?

Irrespective of the language, I try to do justice to all the stories which have good content. So I would put my seniority aside and try to give the best I can for that particular role and film.

Could us tell us more about future projects?

After F3, Gurtunda Seetakalam is releasing this year. After this, I am doing Bholaa Shankar with Chiranjeevi Garu. Also, I am doing three projects for OTT. I am making my Malayalam debut with Bhandra.