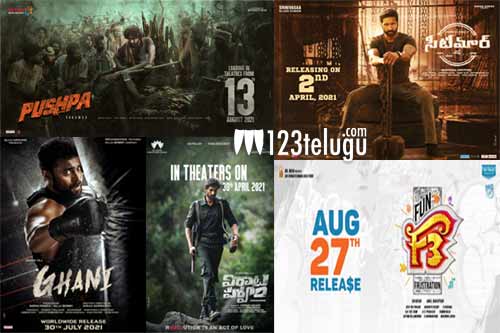 In a mad rush, the makers of as many as 5 upcoming big budget movies featuring star heroes and heroines announced the films’ release dates today. Seetimaarr (April 2), Viraata Parvam (April 30), Ghani (July 30), Pushpa (August 13) and F3 (August 27) are the movies that will be releasing within a gap of 5 months.

Interestingly, all the above mentioned movies are being made in various genres, ensuring a variety of entertainment throughout the summer. While Seetimaarr is a sports drama based on Kabaddi, Viraata Parvam is an intense period drama set in Naxalism backdrop.

Ghani is an adrenaline-filled sports drama with Boxing as its main backdrop. Then comes Pushpa, an intense and rustic rural action drama. Finally, the hilarious comedy entertainer, F3, will conclude the theatrical experience for movie lovers.