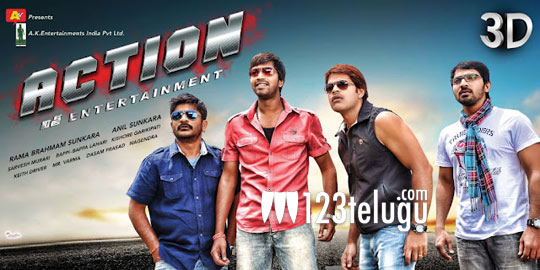 The audio launch of Comedy King Allari Naresh’s big budget entertainer, ‘Action 3D’ , will be held today evening at Prasads Multiplex. The venue has been chosen as the team is planning to show the first 3D teaser of the film to the guests, necessitating 3D glasses and a 3D projector. The event will be attended by some of the biggest personalities from the film industry.

Bappi Lahiri and his son Bappa Lahiri have composed the tunes for this movie. The film is India’s first 3D comedy film and Anil Sunkara has directed and produced this movie.

Vaibhav, Kick Shyam and Raju Sundaram will be seen along with Sneha Ullal, Neelam Upadhyay and Kamna Jethmalani. Sudeep of ‘Eega’ fame will be seen in a special cameo.