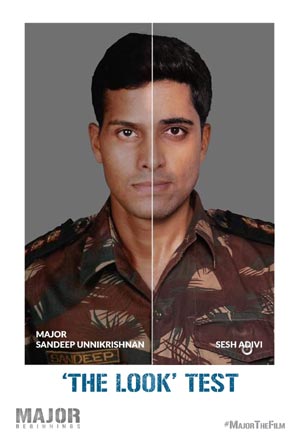 The look test for Adivi Sesh’s ongoing biopic on the slain NSG Commando Major Sandeep Unnikrishnan is out this morning. The look test is a video where Sesh talks about how he was inspired to make a film on Sandeep’s martyrdom during the 26/11 Mumbai terror attacks and his association with the Major’s parents. Sesh says that Major speaks about the way Sandeep Unnikrishnan lived, not about the way he died.

Major is a pan-Indian project and it is being jointly produced by Mahesh Babu’s GMB Entertainments, Sony Pictures and A+S Movies. Shashi Kiran Tikka is directing this prestigious project. Shobita Dhulipala will be seen in a crucial role. Major’s first look will be out on December 17.