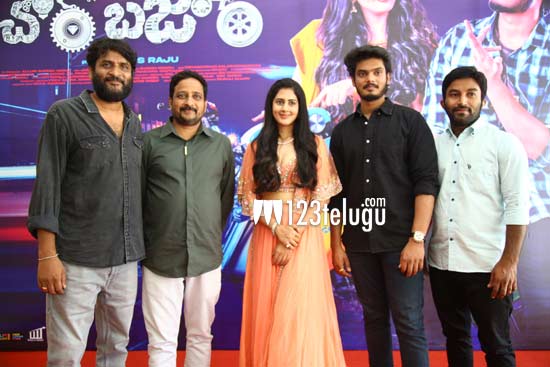 After Romance, Tollywood actor Akash Puri is coming up with another action entertainer Chor Bazaar. Directed by Jeevan Reddy of George Reddy fame, the film has Gehna Sippy as the female lead.

The film’s press meet happened today in Hyderabad. During the event, actor Akash Puri said, “I am eagerly waiting to make the audience watch this movie. Thanks to the audiences who have been supporting the film since the release of the first song.”

“I am also thankful to them for making the trailer a hit. It has clocked more than 3 million views. Netizens are doing Reels to the famous ‘Jada’ song. Thanks to UV Creations for backing our film. Thanks to Vamsi and Pramodh. Chor Bazaar is an out and out family entertainer. Come, watch and enjoy the film in theaters,” concluded Akash Puri.

Produced by V.S Raju under the IV Productions banner, the movie has Archana, Subbaraju, Sunil, Sampoorneshbabu and others in key roles. Suresh Bobbili is the music director for this movie.