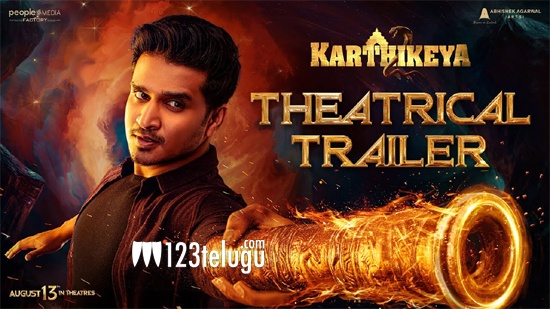 Young hero Nikhil and beautiful Anupama Parameswaran’s Karthikeya 2 is finally hitting the screens on August 13th after a couple of postponements. As part of the promotions, the movie team released the trailer today.

The trailer is very exciting and raised the expectations for the film. The trailer starts with the danger Dwaraka city went through 5000 years ago. Nikhil’s family is told to go to Dwaraka to pay their vow to god.

The film is about exploring the truth of Lord Sri Krishna and the mystery surrounding the beautiful city of Dwaraka. The trailer is visually enchanting and packed with thrilling elements.

Nikhil is once again in top form as Karthikeya, the doctor who tries to unfold the secrets surrounding Dwaraka. Nikhil is accompanied by Anupama Parameswaran and Srinivas Reddy in this mystical adventure.

The production values look phenomenal. It is bankrolled by People Media Factory and Abhishek Agarwal Arts. Chandoo Mondeti who directed the first part is helming this sequel too. Bollywood legendary actor Anupam Kher played an important role in this PAN Indian film.