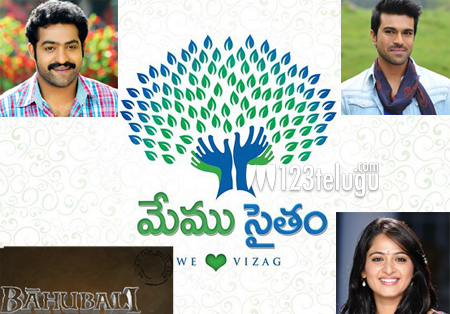 From the past two weeks, we had been continuously bringing you exclusive updates on the special telethon that has been planned on the 30th of this month. According to the latest update, all the top Tollywood stars will be playing a 4 hour cricket match at Kotla Vijayabaskar Stadium. Going into the details of this tournament, all the stars will be divided into 4 teams namely Ramcharan’s team, NTR’s team, Baahubali’s team and Anushka’s team.

Each team will comprise of 6 players and each match will be of 6 overs a side. Interestingly, two top actresses will be part of each of the three teams, while Anushka will have her own ladies team with the latest heartthrob Akhil Akkineni being the only male player in the side.

Almost the entire fraternity along with the stars from Tamil and Hindi industries are set to grace this event. Special skits, dance programs and a lavish dinner with stars have also been planned for this mega telethon, and all the funds raised from this event will go to the Hudhud cyclone victims.