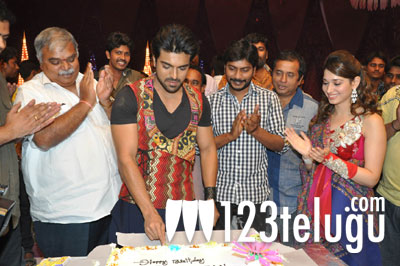 Mega Power Star Ram Charan Tej turns 27 today and he is proving to be a worthy successor to his illustrious father, Megastar Chiranjeevi. The young star made his debut in Telugu with Puri Jagan’s ‘Chirutha’ but his ticket to super-stardom came in the form of Rajamouli’s ‘Magadheera’. The film went on to become the top grosser of the industry and Ram Charan won all round praise for his portrayal of the warrior Kala Bhairava.

Charan will be seen in ‘Raccha’ this summer and he will also be making his Bollywood debut with Apoorva Lakhia’s ‘Zanjeer’. The star will be in Pollachi today to shoot for the final song of the film ‘Raccha’. 123telugu.com wishes Ram Charan Tej a very Happy Birthday!