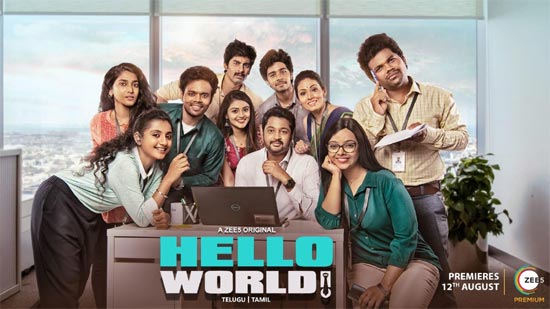 ZEE5 has been relentlessly dishing out a wide variety of content in various formats in Telugu, Tamil, Kannada, Malayalam, Hindi and other languages. The OTT platform has made a name for itself nationwide as a prominent streaming platform since its inception.

Now, ZEE5 is gearing up to present a new Telugu web series. This time, it is coming out with an office drama called Hello World. Workplace dramas are rare to come by and this 8-episode web series promises to be slice-of-life and relatable. It is the story of eight youngsters who step into a large IT company hoping that their struggles are all behind them, only to find that life has a lot more in store than they had imagined.

Hello World is expected to explore the psyche of young techies who step into the corporate world with a twinkle in their eyes. Surely, this is something ZEE5’s patrons are going to love.