Here is when Prithviraj Sukumaran will join the sets of Prabhas’ Salaar
Published on Apr 5, 2022 11:30 am IST 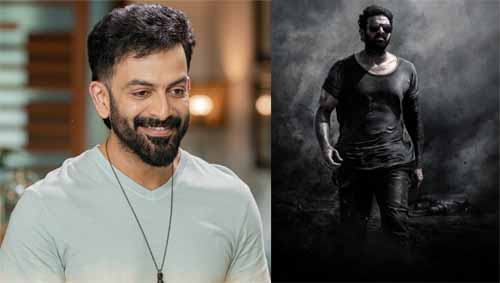 Malayalam star actor Prithviraj Sukumaran will be seen next in Jana Gana Mana. The recently released trailer has created much hype on the film, which is slated to release on April 28, 2022. Meanwhile, the actor is also playing a key role in Prabhas’ upcoming biggie, Salaar, directed by Prashanth Neel.

In a recent interview, Prithviraj has officially confirmed that he is a part of the film. He also mentioned that he couldn’t have joined the sets of Salaar because of the pandemic and dates clash. Now, the actor has confirmed that he will commence the shooting for the pan-India movie after June 2022, as he is currently busy shooting for his Malayalam movie, Aadujeevitham.

Salaar, which is being produced by Hombale Films on a grand scale, has Sruthi Haasan as the female lead. Actor Jagapathi Babu will be seen in a crucial role in this action drama, which will be made in 2 parts. Ravi Basrur of KGF franchise fame is roped in to compose music for this flick.