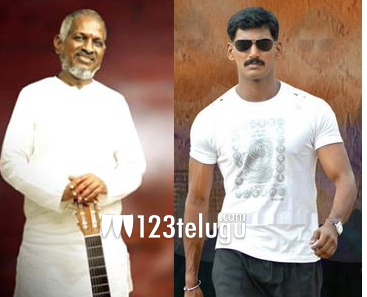 Ilayaraja doesn’t seem to be in a mood to go slow, if the recent turn of events are anything to go by. For his stupendous work in Sri Rama Rajyam, he was conferred with a Nandi Award for 2011 and his music in Gautham Menon’s upcoming film Yeto Vellipoyindhi Manasu brought back memories of a vintage Ilayaraja who inspired an entire generation of music lovers. Last week, his latest film Gundello Godari’s audio was launched and the latest news is that he’s going to compose music for Vishal’s upcoming film. This is the first time Vishal is going to act in a film which has Ilayaraja onboard. Shasikanth is making his debut as a director and he managed to convince Ilayaraja to compose music for his film. GV Krishna is producing the film and the principal shooting will begin in November. More details about the film will be revealed soon.