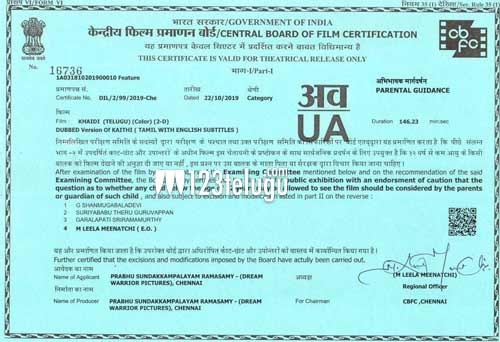 Hero Karthi’s upcoming emotional action thriller, Khaidi, has just wrapped up its censor scrutiny. The CBFC has passed the film with a UA certification. The film has a taut runtime of 2 hours and 26 minutes. With all the pre-release formalities complete, Khaidi is all set for a grand release on October 25.

In Khaidi, Karthi will be seen as a prisoner who runs away to see his daughter after spending 10 years in jail. The entire story unfolds in 4 hours on a fateful night. Apart from the raw and intense action thrills, Khaidi also explores an emotional father-daughter bond.

Lokesh Kanagaraj has directed Khaidi and Bengal Tiger producer Radha Mohan is releasing the Telugu version. This unique thriller does not feature a heroine and songs.