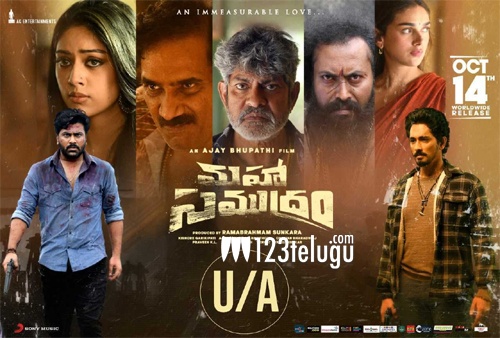 Sharwanand, Siddharth, Aditi Rao Hydari and Anu Emmanuel’s upcoming romantic action drama, Maha Samudram, has wrapped up its censor formalities earlier this afternoon. The CBFC has cleared the film with a UA certificate. The film is all set to open in cinemas worldwide on October 14..

Maha Samudram’s intense and action-packed theatrical trailer was released around a week ago to a thumping response from all quarters. Director Ajay Bhupathi seems to be coming up with a hard-hitting and emotional drama set in the Vizag coastal area. Jagapathi Babu, Rao Ramesh and KGF Ram will be seen portraying menacingly powerful characters in the movie.

Top producer Anil Sunkara has bankrolled the project. Chaitan Bharadwaj has composed the soundtrack. The makers will step up the promotions from now on.