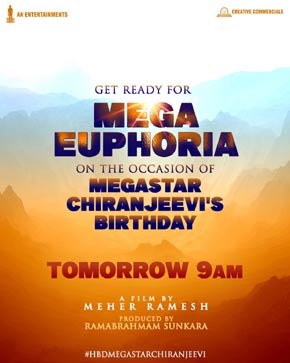 The stage is all set for the grand official announcement on Megastar Chiranjeevi’s much-awaited film to be directed by Meher Ramesh and produced by Anil Sunkara. Apparently, Meher Ramesh has come up with a solid script and be will be showcasing Chiru in a never-before-seen avatar.

This morning, the makers took to social media and announced that the ‘Mega Euphoria’ will begin with the announcement at 9 AM tomorrow on the occasion of Chiru’s birthday. The film is an official remake of Kollywood star Thala Ajith’s blockbuster action family entertainer, Vedalam. Stay tuned for the big update.