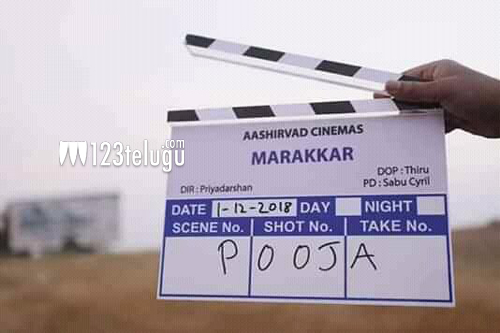 The much talked about Malayalam period was drama, Marakkar, had its inaugural ceremony this morning in Kerala. This ambitious film has veteran star Mohanlal playing the main lead and it will also feature Nagarjuna and Keerthy Suresh in crucial roles.

Marakkar is touted as the most expensive film ever made in the Malayalam cinema history. Producer Antony Perumbavoor of Aashirwad Cinemas is shelling out a whopping 100 crores to make this magnum opus, which will be made in Malayalam, Tamil and Telugu simultaneously.

While veteran director Priyadarshan will direct the film, Janatha Garage and Bharath Ane Nenu’s cinematographer Thiru will crank the camera for this biggie Baahubali and Saaho’s production designer Sabu Cyril is also part of Marakkar’s team.