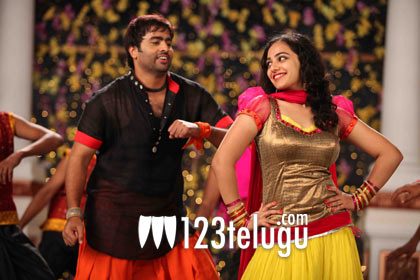 Nara Rohit and Nithya Menen will soon be seen in an action and love entertainer titled Okkadine. Srinivas Raga is directing this film. Except for three songs, the rest of the film has been completed. Currently, a song titled ‘Seethakoka Nacchave Nacchave’ is being shot on Nara Rohot and Nithya Menen in Ramoji Film City. Bhanu Master is the choreographer of this song which is being shot on a lavish scale. After this, an item song will be filmed in the same location. Okkadine’s audio is going to be launched in August and the film is also being planned for release towards the end of August. CV Reddy is producing the film and he’s confident that the film’s content will impress all sections of the audience. Nara Rohit and Nithya Menen’s acting are being touted as the major highlights of the film. Karthik is composing the music.