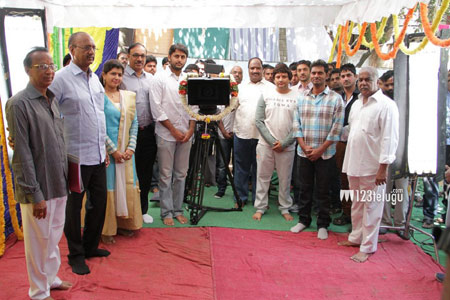 Hero Nithiin’s new movie has been launched today. This film is being produced on Nithiin’s home banner by Nikhitha Reddy. The movie will be directed by Sreenivas Reddy, who will be making his debut with this film. Ram Mohan Rao gave the honorary clap and Sadhanand Gaud switched on the camera. The first shot was directed by Surender Reddy, who happens to be Srenivas Reddy’s mentor.

Producer Nikhitha Reddy said that a new banner is being launched with this project. “In the past, we made Ishq and Gunde Jaari Gallanthayyindhe on Sresht Movies banner and they were very successful. However, we are going to start a new banner with this movie and that is Sravan Movies banner. The film ‘s regular shooting will commence from the third week of March”, she said.

The heroine of the film is yet to be finalised. Mani Sharma’s son Sagar Mahathi will be making his debut as a music director.