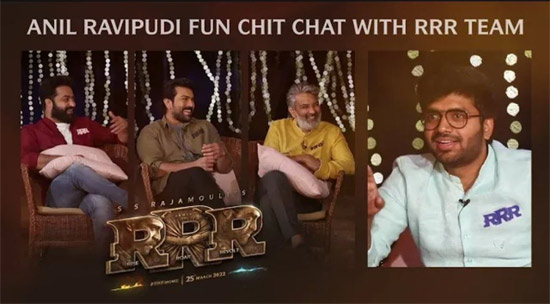 Rajamouli has made RRR promotions quite interesting. Yesterday, he interacted with noted Youtuber, Bhuvan Bam for a hilarious video interview along with NTR and Charan.

Today, star director Anil Ravipudi has interviewed the RRR trio which will be released soon. In one of the videos gone viral, NTR is seen imitating Rajamouli. NTR shows how Rajamouli reacts when he asks for early permission to go home.

The way NTR imitates Rajamouli and his actions are quite hilarious. The interview also has many other fun moments and looks like Anil Ravipudi has done a great job in keeping the RRR promotions in full swing.