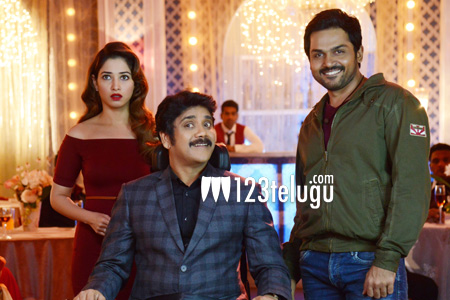 The movie ‘Oopiri’ is all set to hit the screens this 25th. The film is carrying a good buzz in film circles and the recently released trailer has only increased the expectations around the project.

Nagarjuna is so confident about the film that he has been comparing it to the all time classic ‘Gitanjali’ . The way in which Vamshi Paidipally handled the subject in a sensitive way is what reportedly impressed Nagarjuna.

It is indeed a daring move for a mainstream glamorous hero to perform a role that requires him to sit throughout the film in a wheelchair. Nagarjuna usually has a knack for judging a film accurately. So if his prediction comes true, we could be treated to a modern classic.

PVP Cinema is the production house behind the movie and Karthi is playing a lead role in the movie.