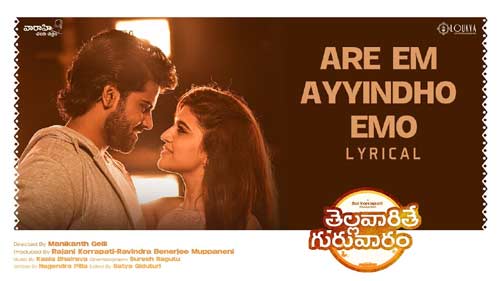 After making an impressive debut with Mathu Vadalara, young hero Sri Simha is gearing up with his second film. Titled Thellavarithe Guruvaram, the film is touted as a youthful romantic entertainer. Young beauty Chitra Shukla is the leading lady in the movie.

Thellavarithe Guruvaram makers launched the first single ‘Are Em Ayyindho Emo’ today. The song is a peppy romantic number and Sri Simha displays his dancing skills in it. The song has been penned by young lyricist Kittu Vissapragada and composed and crooned by Sri Simha’s brother Kaala Bhairava.

Debutant Gelli Manikanth is the director and noted producer Sai Korrapati and Benny Muppaneni are jointly bankrolling the film.