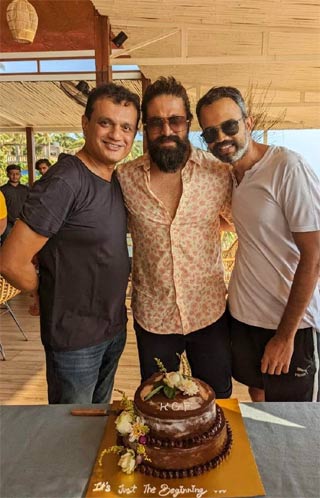 Sandalwood movie, KGF 2, has been continuing its rampage at the box office everywhere. Starring Yash in the lead role, the Prashanth Neel directorial has Raveena Tandon and Sanjay Dutt in powerful roles.

Yash, Prashanth Neel and the producer Vijay Kiragandur celebrated the gigantic success of KGF 2 by cutting a cake. The trio has recreated the pose they gave in the success celebrations of KGF 1. To our surprise, the cake has a sentence, “It’s just the beginning…” Netizens are assuming that they are hinting that KGF 3 is officially on cards.